The IWI Tavor X95 is an Israeli bullpup rifle that has been upgraded for the year 2022. Find out what we thought of it in this full review!...

Your first reaction to the IWI Tavor X95 might be wrinkling your nose and wincing at the word bullpup. After all, the short and stubby design is not as common in America and is typically frowned upon by many.

But those that look down their nose at these rifles do so at their own loss, as there are many benefits and even superior features to some bullpup designs.

Today we will look at one of the flagship rifles from the Israeli arms giant IWI, the Tavor X95 bullpup. Like all bullpups, the X95’s breech and firing mechanisms are behind the trigger. This shortens the overall size of the weapon by utilizing the space in the butt of the firearm that is normally vacant.

I’m no stranger to bullpups, so prepare yourself for some perspective as we go over this very popular and robust little rifle.

Time on the Range

The first trip to the range with the X95 included a hundred or so rounds. I’d brought a few magazines to run through the rifle of various types. I had only installed a red dot as a sighting device with plans to shoot with a riflescope at a later date.

After loading a few magazines and a quick preflight inspection of the rifle, it was time to go hot. Charging the rifle is a very familiar process, seating the magazine and running the charging handle to chamber a cartridge. The safety selector is easily operated with the thumb, making the rifle ready to fire.

I fired a few magazines through the rifle, adjusting my sight a few times for a better point of impact. My initial impressions of the rifle were better than expected. The rifle shot smoothly and reliably. The trigger was a bit mushy for my taste, something common with some bullpups. But I could still shoot properly and get hits where I wanted them.

Reloading the rifle is different than a typical modern sporting rifle. Stabbing the magazine into the rear of the rifle can take some getting used to if you are new to bullpups. The bolt release is centrally located behind the magwell, allowing you to actuate it with your thumb upon seating the magazine. I would have liked to see a more flared magwell, but it could have just been my familiarity with this particular model.

The controls and ergonomics of the rifle seemed to fit me well. The charging handle does have a claw to capture it under recoil. I would have liked a slightly different configuration that offered just a smidge more purchase but again, this is just my preference.

One thing I did find a little annoying was during a reload motion; my trigger finger would often migrate behind the trigger. This made for an awkward transition back to shooting, but again it is likely just a lack of practice with the rifle that could be overcome with some training.

Once my sight was zeroed, I found it easy to hit my targets inside one-hundred yards. But this is by no means a precision shooting rifle, as I confirmed in later range trips using a better scope. Using fifty-five-grain ball ammunition, the best groups I could produce with the rifle hovered around 2.5 MOA. I suppose you could tighten that up a bit with match-grade ammo, and perhaps the upgraded trigger might also help.

The overall feel of the rifle was not bad, though the significant amount of polymer on the rifle does give it a bit of a Nerf gun feel. But technology being what it is these days, polymer is making its way into everything in the firearms market, so I suppose we should just embrace it.

I did take the opportunity to shoot the rifle suppressed. For that, I used the Yankee Hill Machine Turbo T2, a baffled can that mounts to a ratcheting muzzle device. I lowered the gas setting to the lowest setting, which seemed to work just fine.

The suppressed rifle did continue to function flawlessly, though I did notice a bit more gas coming from the ejection port near my face. Perhaps a slightly lower gas setting would have been ideal, but even as the gun heated up significantly, it continued to pump through magazine after magazine.

The sight rail allows for a plethora of options; whether you prefer iron sights or optical sight devices, you can mount it here.

The threaded muzzle allows the user to install suppressors or other muzzle devices to enhance performance or shooting experience.

The X95 can be configured to eject out of either side of the receiver, a significant feature if you have a left-handed shooter in your midst.

This is very convenient when using a suppressor and helps the user tune the rifle’s performance.

Conveniently located under handguard covers at three, six, and nine o’clock, giving you a solid place to mount accessories like weapon lights or a bipod.

The sling attachments are centrally located, which allows the weapon to be suspended at a center balance point on a single-point sling if desired. Additional options can be added to the accessory rails.

The built-in flip-up sights come as part of the rifle allowing for a backup option should you need it.

During the duration of our time with the gun, the majority of the ammunition fired was PMC Bronze 55 grain. I had no malfunctions that weren’t operator initiated, leading me to believe that the rifle liked this particular ammo selection. I did shoot a small amount of Speer LE 75 grain SP ammunition which also worked flawlessly.

I performed no maintenance on the rifle during the test period; only the lubrication previously applied to the internals of the rifle was present. And there were some long strings of fire shooting several thirty-round magazines one after another looking for malfunctions.

At one point, I did get filthy by disassembling the rifle to switch it to left-hand eject, just to see how it went. While not difficult, I would prefer not to do such a thing outside of a bench.

A good optical sight like a 1-6 power variable would be very handy for this rifle and allow you to use it to the edge of its useful envelope. I would recommend Something like a Trijicon V-cog or one of the Vortex Strike Eagle 1-8 power scopes.

A good sling can be very helpful, the one I used was an inexpensive EZ Shoot sling from Amazon, but you get what you pay for, so choose something you like.

A Geissele Lightning Bow trigger is a much-needed upgrade in my opinion. The standard X95 trigger is certainly serviceable but leaves much to be desired. The aftermarket has created a great upgrade option that is well worth it for this rifle.

The MDRX shares quite a few functional similarities with the X95, and a few additional ones. While it doesn’t have the military record of the IWI, it does have more and better multi-caliber options like 6.5 creedmoor and 308win in addition to the 223 caliber.

This would definitely be a distant third place. The RDB is a fun little rifle and, in my experience, pretty reliable. The Steyr AUG and FN FS2000 have more use in service and are arguably much better than the RDB. That said, I don’t really like either of them that much.

How to clean your IWI Tavor X95?

Disassembly of the rifle is easily explained in the manual, showing lubrication points. The ability to remove the barrel does increase the ability to get a deep clean.

Watch the following video for a demonstration.

What type of laser would be best for the IWI Tavor X95?

I haven’t used many lasers with this rifle, but adding something like the Holosun LS117R would be easily mounted and give a strong laser aiming point.

Why did the IDF Choose the Tavor over the M4?

The X95 is a more compact weapon than the M4 pattern rifles. Its small size and better balance allow for better maneuverability in tight spaces and vehicles. It does this while performing as good or better from a ballistic perspective.

The Tavor X95 has a strong record both as a civilian defense and sporting rifle, as well as a rugged service record with military groups all over the world.

I believe it’s the most fielded modern bullpup since the SA80, and has seen hard service in all kinds of conditions.  All this work has surely taught the good folks at IWI how to improve the rifle, making current revisions of the rifle some of the best.

The fact that it is a bullpup rifle can be a turnoff to many, but the X95 does share a good deal of handling properties with the prolific M4 type rifles most are familiar with. I like the rifle, but there are others I like better. But I certainly would feel comfortable fielding the X95 as a second choice.

Overall it is a great rifle. My only major deterrent is the factory trigger. This is certainly subjective, as you may find it to be just fine. If you are looking for a hardened battle rifle with a big bark but the stance of a bullpup, then the Tavor X95 is just your gun. 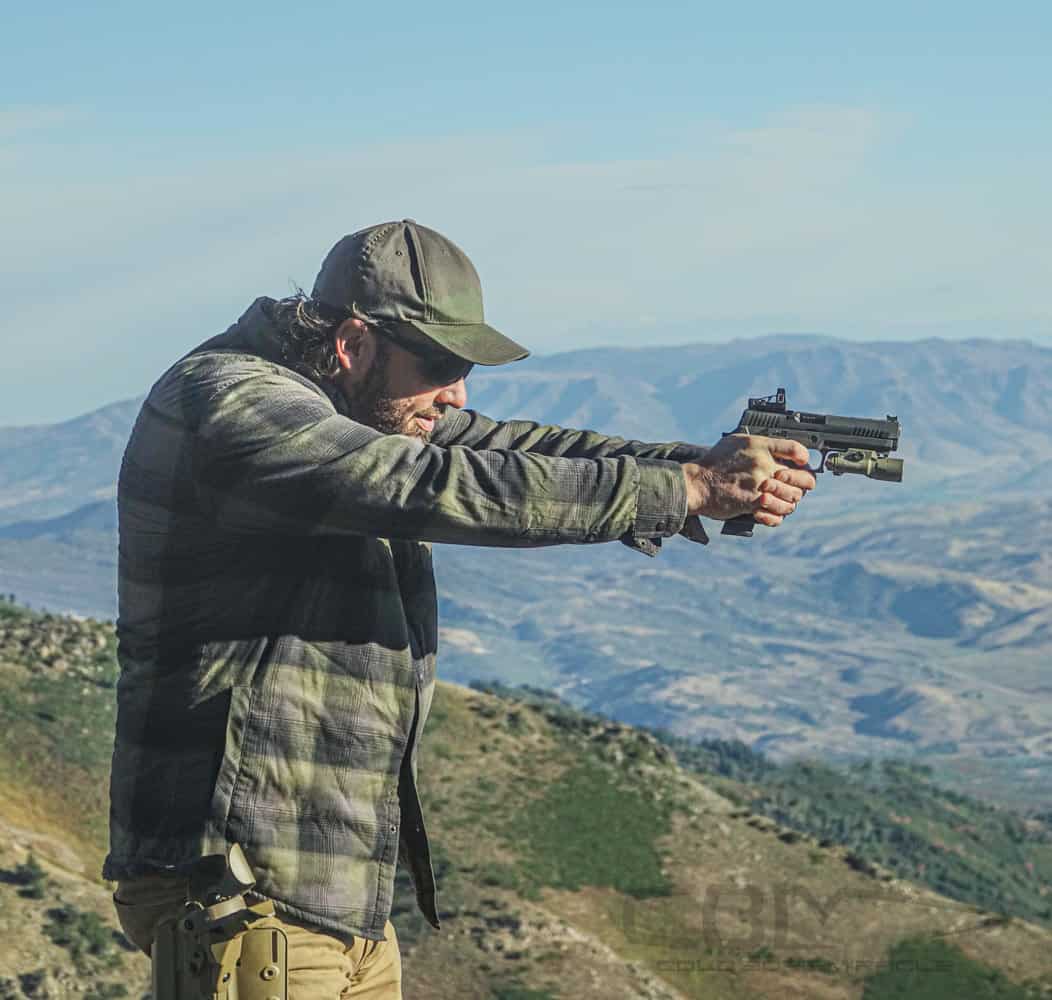 I love my x95. The rifle has been extremely reliable and I love the upgrades over the original SAR model. Especially the mag release.

Agreed. The sbr kit from iwi is definitely worth it as well, but it is difficult to find it in stock.